My 1942 edition of A Treasury of Great Poems has been kicking along on my bookshelf since I stole the volume from my dad on my way to college. I have memories of him reading the book in bed, though I never spent too much time thinking about it at the time. Later, much later, when I became an English major, I lifted the battered blue collection and have kept it close ever since.

A Treasury of Great Poems went with my wife and me to the coast on some of our early dates. I have a framed photo of us with ridiculous 1980s hair and equally silly sunglasses laughing on the beach, the book open in front of us.

The volume traveled with me to Michigan State, where I went to graduate school, and then back to Oregon, where I got married. It saw a decade in the San Francisco Bay Area, and shifted to a bookshelf in Southern California before my wife and I came to our senses and returned to the rainy home we’d known most of our lives.

Now it occupies a place on a bookshelf in my office, between a two volume set of Sherlock Holmes stories and a book of Borges’ collected non-fiction. I knew it would be one of the last books I picked up for this Year of Poetry, and one of the few anthologies; I also knew that I wouldn’t let this silly project end without returning to its pages, at least for a little while. 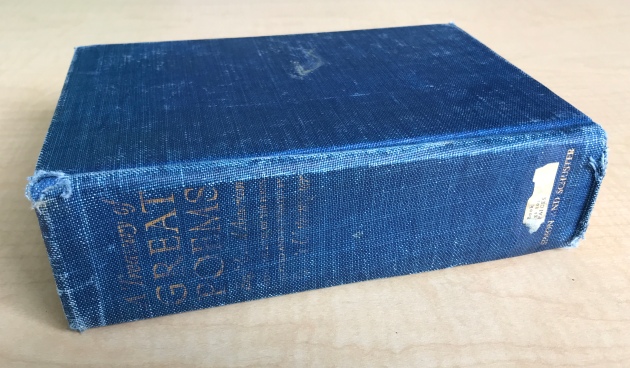 With more than 1200 pages of verse, A Treasury of Great Poems is broad river and this modest post a teacup, so I’ll limit myself to three poems, and allow the reminiscences that this week has brought me to infuse what it can with a sense of nostalgia.

Starting nostalgically, earlyish in the collection are selections from Shakespeare, including one of Oberon’s monologues from A Midsummer Night’s Dream:

I know a bank where the wild thyme blows,
Where oxlips and the nodding violet grows,
Quite over-canopied with luscious woodbine,
With sweet musk-roses and with eglantine:
There sleeps Titania sometime of the night,
Lull’d in these flowers with dances and delight;
And there the snake throws her enamell’d skin,
Weed wide enough to wrap a fairy in:
And with the juice of this I’ll streak her eyes,
And make her full of hateful fantasies.”

It’s always a little weird to excerpt from a play, but spending time with A Treasury of Great Poems made me realize that some bits of Shakespeare I encountered first in this way, even before I read or saw the play as a whole. “I know a bank where the wild thyme blows” is, in this book, its own entity, and as such invites a closer reading and encourages us to pause there in the forest and really listen. Rereading that poem now took me back to a time before I had as much poetry on my bookshelf, when my area of lit’ry expertise extended about as far as Sherlock Holmes, Edgar Allan Poe, and Moon Knight comic books. I’ve come to appreciate language much more since then, and I think A Treasury of Great Poems contributed to my being able to slow down and appreciate words more. Shakespeare’s rich language, lulling us “with dances and delights” shows the power of poetry to capture, in just a few words, the spirit of something grand.

Nothing could be grander than love, and some 500 pages later A Treasury of Great Poems finds “Love’s Philosophy” by Percy Bysshe Shelley. The book opened to this poem, an envelope tucked inside with my name on it in the handwriting of a college coed who would become my wife.

The fountains mingle with the river
And the rivers with the ocean,
The winds of heaven mix for ever
With a sweet emotion;
Nothing in the world is single;
All things by a law divine
In one spirit meet and mingle.
Why not I with thine?—

See the mountains kiss high heaven
And the waves clasp one another;
No sister-flower would be forgiven
If it disdained its brother;
And the sunlight clasps the earth
And the moonbeams kiss the sea:
What is all this sweet work worth
If thou kiss not me?”

Was this one of the poems I read aloud with my wife to be on the beach? I’m a gentleman, so I’ll leave our courting for more private revery, but more than thirty years later she’s just in the next room, so I think I really ought to pause in typing this and go read her a poem.

Thomas Gray’s “Elegy Written in a Country Churchyard” is a nice end to the earthier subject matter from the other two poems. An old standard, this poem speaks to life and loneliness, class and culture, death (of course) and what it means to live.

Gray’s opening stanza, a powerhouse of literary devices (that any reader who has stuck with this post this long knows without me enumerating them) sets the tone and gives us four of the most memorable lines in poetry.

The curfew tolls the knell of parting day,
The lowing herd wind slowly o’er the lea,
The plowman homeward plods his weary way,
And leaves the world to darkness and to me.”

Gray goes on to describe the landscape, a landscape that a century later writers like Hardy will make real for readers of novels, including a “moping owl” complaining to the moon and swallows “twitt’ring from the straw-built shed.” Within that landscape he places the rustic inhabitants of his poetic vision, and introduces the death that prompts the elegy in the title.

For them no more the blazing hearth shall burn,
Or busy housewife ply her evening care:
No children run to lisp their sire’s return,
Or climb his knees the envied kiss to share.”

It is a noble death, or noble life as it were, and Gray warns “the boast of heraldry, the pomp of pow’r” not to discount that hand-wrought honor.

Let not Ambition mock their useful toil,
Their homely joys, and destiny obscure;
Nor Grandeur hear with a disdainful smile
The short and simple annals of the poor.”

Death is death, and like Hamlet chiding his uncle with the king going progress through the guts of a beggar, Gray puts rich and poor alike in the same reality of death, asking:

Can storied urn or animated bust
Back to its mansion call the fleeting breath?
Can Honour’s voice provoke the silent dust,
Or Flatt’ry soothe the dull cold ear of Death?”

Gray spends some time reflecting on poverty and the injustices it brings to the potential of the poor.

Full many a gem of purest ray serene,
The dark unfathom’d caves of ocean bear:
Full many a flow’r is born to blush unseen,
And waste its sweetness on the desert air.

Some village-Hampden, that with dauntless breast
The little tyrant of his fields withstood;
Some mute inglorious Milton here may rest,
Some Cromwell guiltless of his country’s blood.”

Then Gray’s elegy takes us into that country churchyard of the title and invites us to walk the grounds with the poet, far, as he tells us, from the madding crowd.

Yet ev’n these bones from insult to protect,
Some frail memorial still erected nigh,
With uncouth rhymes and shapeless sculpture deck’d,
Implores the passing tribute of a sigh.

Their name, their years, spelt by th’ unletter’d muse,
The place of fame and elegy supply:
And many a holy text around she strews,
That teach the rustic moralist to die.”

We walk in “lonely contemplation” with Gray as he takes us to “the foot of yonder nodding beech / That wreathes its old fantastic roots so high” where the subject of our elegy was wont to sit, past the “brook that babbles by” and “the heath and near his fav’rite tree,” all vacant now that our rustic has been borne to the churchyard of the title, where we are invited to: “Approach and read (for thou canst read) the lay, / Grav’d on the stone beneath yon aged thorn.”

I thought a lot about my dad when I read this poem. His memory (except for a few people and places) has been brushed away by dementia. His poetry reading days are gone.

I can still see him with a book in his hand, his favorite Don Quixote, a little poetry, or one of the more philosophical books he read when last he read. That younger man is gone, replaced by a fellow who takes delight in the dog and watching ducks at the pond, rustic pastimes if there ever were any.

The poetic epitaph inscribed (by a poet within Gray’s poem) on the gravestone in that country churchyard reinforces the ideas from “Elegy Written in a Country Churchyard” and reminds us to keep perspective, even as the world around us slips continually away.

Here rests his head upon the lap of Earth
A youth to Fortune and to Fame unknown.
Fair Science frown’d not on his humble birth,
And Melancholy mark’d him for her own.

Large was his bounty, and his soul sincere,
Heav’n did a recompense as largely send:
He gave to Mis’ry all he had, a tear,
He gain’d from Heav’n (’twas all he wish’d) a friend.

No farther seek his merits to disclose,
Or draw his frailties from their dread abode,
(There they alike in trembling hope repose)
The bosom of his Father and his God.”

I could spend a year reading only poetry from A Treasury of Great Poems and not run out of subject matter. Instead, I’ll keep this volume close to my heart and bring this post to a close.

I don’t know if either of my kids will steal A Treasury of Great Poems from me. Right now neither show any signs of such imminent thievery, though at their ages neither did I. Until one does it will stay with me, pulled from the shelf when I need a spot of verse, treasured as much as anything I own. It is my first memory of poetry, my introduction (even before poems in school) and a fitting (almost) end to a year of living more poetically.

Finishing this year of poetry next week with one final post that takes us back to William Butler Yeats.

One thought on “A Treasury of Memory”