As the 2000s became the 2010s ACMA continued to evolve as an arts school. Students pursued traditional pathways like painting, drawing, dance, and theatre, and pushed the boundaries of art in ways as creative and diverse as the students themselves.

One example of this exuberant innovation came when an unusual fashion show took to the main stage of the PAC: Paper Dresses.

Gail Heymann, who taught the book arts class behind the show, remembered groups led by seniors collaborating on designing and creating a “creative fashion made of paper.” They worked together to choose materials, much from the stacks and stacks “hoarded” in the back storage room. Then, using sheet music, recycled material, and patterned paper, they became fashion designers.

Dance instructors worked with the models on their runway struts, an audience of students filled the PAC, and with the jazz band playing behind them, paper dresses took to the stage.

Look at photos of the event and you’ll be inspired by the whimsy and artistry of the student designers. The dresses, vests, and hats are all made from paper, soaring expressions of creativity.

The models look like they’re having a good time too.

As one graduate put it: “I always felt a little like a wizard, and when I came to ACMA I found my Hogwarts.” 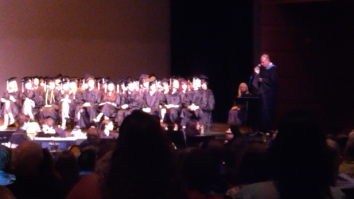 Dumbledore to that Hogwarts for thirteen years was Michael Johnson, who cared for  deeply about the arts and his student artists. In the spirit of ACMA, he answered the request of his graduates in 2014 with a song.

A student accompanied Mr. Johnson on piano when during the commencement ceremony the principal picked up a microphone and sang The Prayer, a song made popular by Celine Dion.

His voice filled the performing arts center with care and paternal affection as he sang:

Just like every child
Needs to find a place,
Guide us with your grace
Give us faith so we’ll be safe”

ACMA has been, is, and will continue to be that place of safety and grace, passion and purpose, acceptance and celebration. Its magic is hard to pin down, but no less tangible than a paper dress or a song.

What is ACMA? Ask a dozen ACMA students and you’ll get thirteen answers. None, I’ll wager, are better than this summation by current ACMA freshman Eli Merritt. “In jazz, everything is about making chaos orderly, whether it’s learning to solo calmly at an incredibly slow tempo behind a singer or playing some lick at lightning fast speeds. I believe that can be used to represent ACMA as a whole. We’re chaotic, but our chaos is the most organized thing about most of us. And that’s true for all of our art forms. Here at ACMA, we are more than just the artists, we are the art. We are more than individuals, we are a family.”