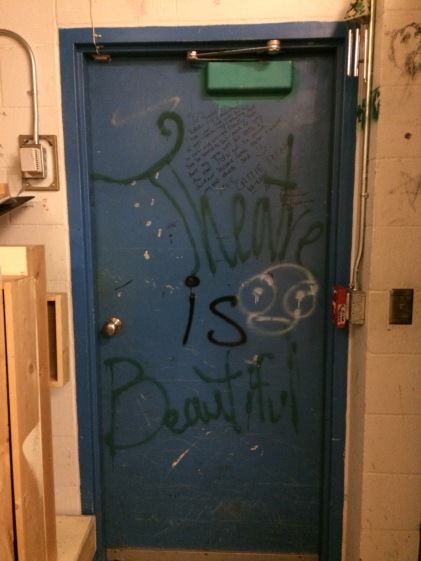 Remnants of memory still fill the walls of the storage area behind the cafeteria, words from across the years looking down on piles of plywood sets and platforms, scraps of faux brick, wooden boxes, swinging stage doors, and even a wooden shield or two. This was once “backstage,” though there wasn’t actually a connecting door that actors could open, when the stage at ACMA was the south end of the Quonset Hut. This was before the Performing Arts Center opened on campus in 2010 and it saw the genesis of theatre at ACMA.

“There wasn’t a shell or cyclorama to hide the wooden backstage structure” recalls Linda Bloom, who taught theatre and tech in that airplane hanger. “One year there was a technical theatre class. The first order of business was to paint the backstage area black. We also painted the stage black. Lots of black paint, many hours, several coats. It was starting to look like a real theatre space.”

Those early shows were adventures in ingenuity for clever directors, flexible performers, and Herculean stage managers. “Dressing Rooms? There were two locker rooms behind the stage area,” explained Linda Bloom. “The custodial staff used one for excess supplies/furniture. The other was for props and costumes, in bad need of organizing. Tech theatre began to hang costumes and label the prop boxes. Casts preferred to change in the school restrooms. This meant the building had to be opened during any type of performance because there were no self-contained restrooms in the food court facility, proper makeup lights were non-existent. The cast put on makeup and dressed in the restrooms, while the audience was also using them.” She laughed at the memory, grief softened by time gone by, and then described the ACMA production of Bullshot Drummond, a crime farce “with about three thousand props, each used barely once.”

Those long tables of hats, and books, and coffee cups, stretched out in the “prop room,” which Linda explained “was also considered the ‘green room’ where the actors hung when they weren’t on stage. Of course they couldn’t hear the  show, and that meant they couldn’t hear their cues, so frequent visits to the backstage happened often, so as not to miss an entrance.” 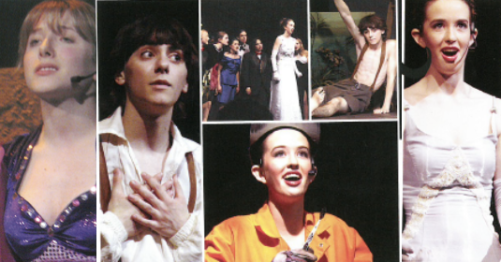 ACMA’s first musical was in that almost real looking space, The Apple Tree, in 2009. Brian Bertram remembers that “it sat roughly eighty people in very uncomfortable chairs. The ‘dressing rooms’ were on either side of the stage, and some overflow in the portables. Nevertheless, we had a two person live band (keyboards by Jodie DeHaven, all other instruments by Alex Milstead). The refrigerators that always had to stay plugged in would kick on in the middle of every performance, and they were SO loud! Performances always smelled like chicken nuggets, and we had little control over the heat. Rehearsals took place all over the school in any found space with a piano.”

That willingness and ability to stand by the old axiom the show must go on was just something ACMA theatre did. Our kids owned “our makeshift stage with pride, confidence, and a love of theatre that transcends the space,” remembers Brian Bertram, “making it a magical place, filled with passion and excitement.”

The Apple Tree wasn’t the only show with that passion and excitement. Jon Albertson recalled a production of Much Ado About Nothing set as a 1960s Annette Funicello and Frankie Avalon beach picture. The war was replaced by a surf contest, and he played the friar while his son played Leonato. “My most vivid memory is completely spacing my lines during the wedding scene,” he told me “and my son leaned over and cued me.”

Performers working together made the space work, sometimes magically.

From Gossip to Kahlo’s View, jazz concerts, dance shows, The Good Doctor, and Antigone, ACMA thespians, musicians, dancers, and other performers made the stage their own.

Even after those programs left the Quonset Hut, whispers of memory remain. 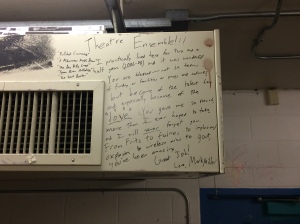 They can be heard with a visit into the rooms behind what was the stage today. On the walls, messages from theatre students (addressed to theatre students) talk about love, appreciation, and the importance of taking risks and making art.

Students who performed in this unique venue could tell you a thing or two about making creative magic. 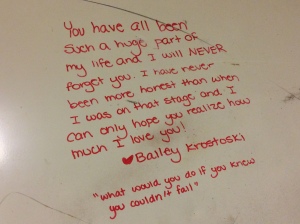 Ovid’s Metamorphosis, for example, when Director David Sikking and his crew built a giant pond to serve as the stage. Actors were barefoot, and moved over and around the water as part of the show.

…and when they knew it was coming to an end as a performance space, creativity had one last surprise. For ACMA’s production of Alice in Wonderland, theatre techs cut trapdoors in the stage, knowing this was the final show. Fanciful, fabulous, and freeing, the “cafegymnatorium” had one final run to offer the performers.

No matter the space, the creativity that artists bring to their surroundings can be inspiring. As the back of a weathered metal door tucked in the back of what is now a storage room tells anyone willing to listen: “Theatre is Beautiful.”