His email arrived like a gust of Alaskan wind, ruffling an otherwise uneventful Thursday and bringing with it a hearty smile.

I’m trying to find the photos of my grandfather, Dr. CE Mason, which I know I have someplace. I fear they may be in my Conex shipping container, which is at this time completely buried in snow.

But these two photos are good for a start. They were taken by my grandmother, Bertha Clement Mason. She developed and printed her own photos. The information says they were both taken on the Canby to Molalla Road.

I’ll keep looking for the other photos. Gramps was a big fan of getting studio portraits taken.

As many folks know, I spent the better part of the fall searching for a photograph of C.E. Mason, the fellow our school building was named after in 1949, a local doctor and school board member, and a truly valued citizen of our little town in the first half of the 20th century. He was, by all accounts, also known as being generous to those he served as a physician, an advocate for quality education in Beaverton, and an extremely kind person.

Stories of the hundreds and hundreds of babies he delivered in the 1920s, 30s, and 40s, many in peoples’ homes, abound, as do memories of him taking in payment what his patients could afford. As I heard these stories in the fall, I could imagine him traveling the dirt roads out to farms, calling on those in need with the care, kindness, and professionalism that would endear him to generations of Beaverton families.

With this note from his grandson James came photographs that brought those imaginations to life. The first was of Dr. Mason traveling by horse and buggy.

I could almost hear the clop of the horses and see the doctor as he bent his head toward the work at hand, helping those in need. It reminded me of a story told to me by one of C.E. Mason’s other grandsons, Richard, who said that once he “met an old couple whose family farm had been sold to build a new housing development. The couple, twin brother and sister, had a fascinating personal story that still made them smile.

“They were born at home in the late thirties to a young mother. Back then, twins were a challenge, so apparently C.E. never told their mother she had twins. She went into labor late one night and C.E. drove out to the farm and delivered the first baby around 11:30 at night. Then, he told the mother, “My goodness, we’ve got another baby in here.”

“The mother said, “Well, I’m exhausted.  I’m going to sleep.” After 45 minutes, she awakened and pushed out the other baby, which was born at 12:15 am. The two were delighted to tell people (all their lives) that although they were twins, they had different birthdays.  They smiled when they told me the story and they were in their late 70’s.”

The next picture, from the same era, shows the tall, lean C.E. Mason, bowler hat and dark suit, standing in a very Oregonian landscape. Not one to be confined to a city, I thought, not unlike his grandson in Nome.

Look close at this photo and you’ll see the rutted dirt road on which Dr. Mason piloted his horse and buggy. From his dapper bowler and bow tie to his well worn shoes, C.E. Mason is every inch a country doctor who made a difference. I can almost make out his stethoscope bulging from his coat pocket.

I love the fact that it was Bertha Mason who took and developed the photographs, something I mentioned to our current photography classes when I showed them the pictures. She was an artist in her own right, I thought, looking at that photo in the woods, and a good one at that.

Another email followed the first, with two more delightful pictures. The first gives a face to Bertha, standing beside her husband, taken sometime around 1910. They’re a handsome couple, poised on the start of a grand adventure that will take them from Illinois to Oregon.

The final photo is a studio portrait from 1960. The fifty years that separate these two photographs were filled with so very much history, including in 1949 the naming of a new Beaverton Elementary School after the good doctor. Arts & Communication Magnet Academy now lives on the spot of C.E. Mason Elementary, and as we look to rebuild campus at the end of this year, it makes me happy to have a photograph that we can frame and put in our office, a nod to a founding father, and a reminder that kindness and generosity, dapper bowlers and well worn shoes, a sense of civic spirit and a dedication to education will always have a place in our school. 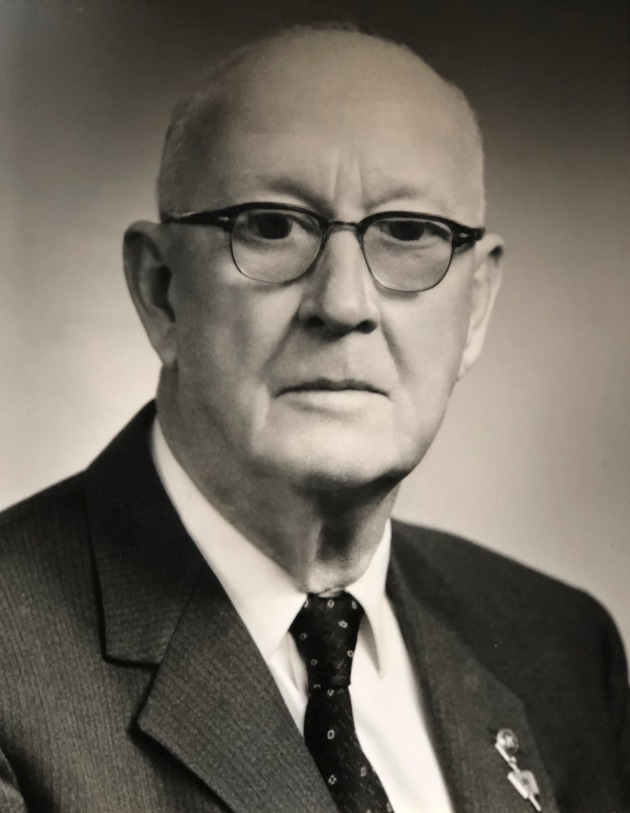 On a personal note, I want to say a heartfelt thank you to James Mason for sharing these beautiful photographs of his “gramps.” They bring to life a person I’ve read much about and whose story I am proud to share with our school community. Thanks too to Richard Mason for the memories of C.E. he shared. Learning more about our past helps us gain perspective that can make our collective future better and better. Thank you.