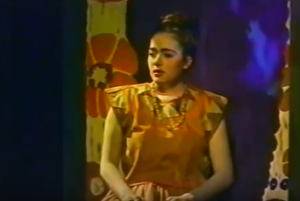 The ambitious project involved acting, dancing, and song, all in the service of celebrating the history of a visual artist, really two: Frida Kahlo and Diego Rivera. It was written and performed by ACMA staff and students, filmed by ACMA kids, and produced with images developed by ACMA artists. In 2002 Kahlo’s View captured the artistic energy of a school driven by creativity.

Kahlo’s View was a collaboration on the part of Theater and Dance and was the grand artistic expression at the end of that year’s “IT” (or Inter Thematic), which a teacher who was there at the time described as “what capstone was before it was capstone. It was a requirement, but of the whole school, the entire school participating with one theme at the center.” 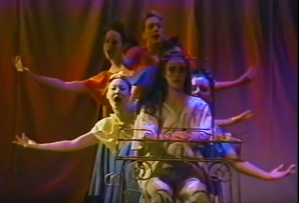 So when it came time for a spectacular spectacular, the production that would become Kahlo’s View was a natural culmination of a year’s creative study.

To watch Kahlo’s View today is to be wowed by the scope and aspiration of the project. The video of complete show, recovered from a single VHS tape tucked away in the dance office, shows a production hard to believe took place in a Quonset Hut. 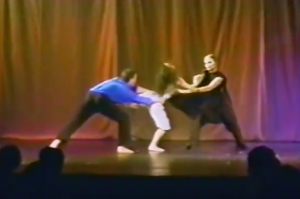 Dreamy and deliberate, moving and as symbolic as a Kahlo painting, the show meanders in and out of Kahlo’s memories, strikes emotional highs, and fills the stage with feelings as deep as a great artist (or ACMA teenager) might feel. With drama, pathos, tears, art, wailing, and a gnashing of teeth, Kahlo’s View has everything you could want in a bio-pic, along with more than a few interpretive dance numbers and a couple of songs.

Kahlo’s View was was written and directed by Rebecca Singer, ACMA’s drama teacher, and choreographed by Dance West’s Julane Stites. “We had gotten together once to discuss ideas” Stites told me, “and really never rehearsed again until we put it together for the tech rehearsal. We were both blown away at how our work blended. It was as if we had had a million rehearsals together.” 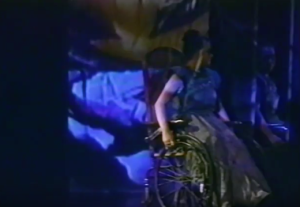 The actors and dancers, students at ACMA who cared deeply about art, inhabited their roles completely. From words to movement, song to spectacle, they became the artists they were celebrating.

The Elephant and the Dove, as Kahlo called Rivera and herself, were the embodiment of the larger than life existence of unapologetically creative souls. They resonated with ACMA students and staff who saw in them two patron saints for the artistic life they were choosing for themselves.

At this point in its history ACMA was cementing its sense of self as a haven for artists of all kinds, a place that demanded artistic integrity, and a community that supported the creative enterprise. Students at ACMA had, were, and would think divergently, perform fearlessly, and live life with the hearts of artists. They were as powerful as elephants and as tender as doves.

One thought on “The Elephant and the Dove”