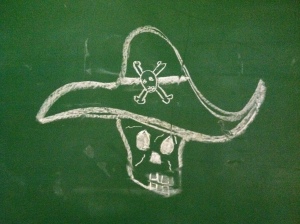 Quietly passing next week, like a rowboat of buccaneers sneaking out of a hostile harbor, is the twentieth anniversary of something meaningful to me and maybe a few students I had the pleasure of sharing a classroom with: Pirate Week.

It started as a lark, a fellow English teacher and myself looking up at the gray winter sky and recognizing that everyone in the state seemed to be in a bad mood. It was January 1998 and we wondered what we could do to cheer up our school. Pirates, we thought. Everyone likes pirates. Right?

Ah, to be young and foolish.

We set the date of “Pirate Week” for the short week after President’s Day; four days seemed more manageable than five, and we had no idea what we’d do. 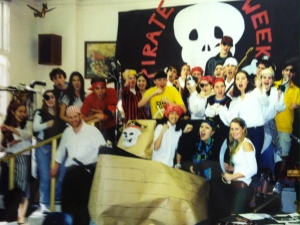 I grew a beard. It came in an inspiring red; my last beard showed far too much gray.

My students found a long forgotten wooden replica cannon in the theater’s prop room and somehow managed to install it in the front of my classroom. They plotted costumes, devised activities, and planned adventures for the week ahead.

That first week was an experiment. A treasure hunt, the occasional raid of my fellow English teacher’s classroom, a bit of hardtack, and lots and lots of “ARRRRRing!” We ended the week exhausted.

…and folks seemed in a better mood.

Pirate Week continued every other year after that (every year would be too much, so we added Space Week in 1999, another post for another time). It followed me to two new schools, at one my students put on a pirate themed craft day for a local elementary class, and at another an intrepid student painted my classroom door with a swashbuckling mural (with a winking nod to Space Week too).

One year a band of teachers joined me in a pirate choir who toured the school singing “A Pirate’s Life.” We were loud, if not too much in tune, and as with the first Pirate Week, shanties and such seemed to bring smiles to the midwinter blues.

Over time kids started bringing me pirate things: a flag, a cookie jar, a peg legged statuette, and when I transitioned from the classroom to being an administrator that buccaneering spirit continued on thank you notes, the occasional Halloween costume, and an amazing ceramic wall hanging given to me by my secretary.

Inspired by Pirate Week, when my niece was young I even wrote a seafaring story, Pirates Plunder, that I could read aloud to her at bedtime, scribbling sketches in the margins to make her smile. She chuckled at the drawing of Captain Tee wearing a lei. I kept my day job.

My life as an administrator has contained a few fabulous piratical moments, no raids or singing, but more kindness than a flotilla of ships and a spirit of fun whose memory brings me joy.

And today, twenty years later, I look back at Pirate Week and think fondly of every eye-patched and hook-handed student I ever taught. I appreciate the teachers who joined me in some scurvy fun, and the administrators who put a second eye patch on long enough not to see the shenanigans happening on their ships. It was all in good fun, after all, and no one got hurt.

I keep a copy of Treasure Island near my desk these days, the bookmark a collection of photos from that faculty pirate choir. On my wall is that ceramic skull and crossbones, and on the back of the clipboard I carry around a sticker given to me by a student who had visited the Caribbean. This President’s Day week will go by more quietly than 1998’s, but with no less of a sense of adventure.

To all those kind souls who sailed with me during a Pirate Week, I say thanks. To them, and to any I haven’t met under a black flag, I wish a fair wind, a box of gold, and pinch of that pirate spirit every single day!