There are times a little detail, a small image, lodges itself in memory, a burr on the woolen sock of life. Last year San Dieguito alum Mike Koslowski, class of 1974, returned to campus to present the school with a “Golden Football,” an honor he earned by playing on the 1982 Miami Dolphins Super Bowl team.

Koz and I met ahead of the ceremony and his stories of San Dieguito in the 1970s were funny, heartfelt, and delivered with a smile. He’d grown up along the coast, played volleyball as well as football while a Mustang, and had a knack for spinning yarns of North County as it was when it still felt very much like a small town.

We filled the library with students on the day he came to officially present the ball, and alumni joined us to welcome Koz home.

As expected, he talked about his athletic pursuits while wearing a Mustang uniform, and the student athletes in the crowd enjoyed hearing about his passion for competition and listening to him describe his winding road to professional success.

Then, about halfway through his talk, Koz paused and asked: “Do they still have those cinnamon buns?” The kids looked at each other, puzzled. Someone offered: “I don’t think so…” Koz closed his eyes, bringing back a memory. 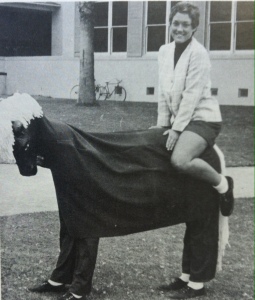 Koz went on to describe life on campus during the Nixon administration, a world filled with dress up days, school spirit, and even donkey basketball. Then he paused again and asked: “How about streakers?”

“Koz,” I interjected from the wings. “Let’s go back to the other buns. I’d rather have cinnamon rolls on campus than streakers.”

His memories of San Dieguito in the 1970s are comprehensive and deep, and today, a year after his visit, I remember so clearly his laugh, his love for our school, and the little details of his youth that he was so generous to share.

Much has changed at San Dieguito since Koz walked these breezeways, and much hasn’t. Students still play sports, make memories, and “horse around” in ways that would make Koz proud.

We’re a school that values our heritage and our alumni and celebrates the traditions that are part of our collective history. I love the school we are today and the energy and enthusiasm our students and staff bring to all they do, though I’d be fibbing if now, after spending some time with Koz, I didn’t admit that sometimes as I cross campus I wish that I could smell the scent of cinnamon.

One thought on “Buns”