As a snapshot in history, yearbooks are a great way to see what was happening on campus in any particular year. Celebrating the 80th anniversary I’ve been choosing a yearbook from each decade of San Dieguito’s history and sharing a few of the highlights, photos, and memories, to do my imperfect best to remind our 21st century audience what life at San Dieguito was like in years gone by.

I’ve played “Donkey Basketball” so I can tell you how nutty things must have been at San Dieguito in the late 1960s.

No one had yet walked on the moon when students arrived on campus in the fall of 1968, though space was a topic on many folks’ minds. Conflict was alive worldwide and at home, as was love, and as hair got longer and attitudes got freer, the times they were a’changin’. 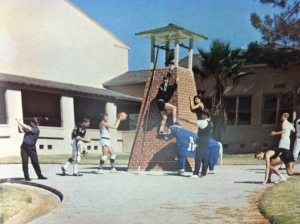 These changing times show up in the San Dieguito Hoofprint, where a quick tour of the 1969 yearbook shows a glimpse into a world of high fashion, rock and roll, and campus hijinks, including wagon races, climbing the bell tower, and laughing with the four legged mascot.

By the 1960s some color photographs made their way into the yearbook, and in 1969 those included curiously posed tableaus of athletics, Mustang royalty on the beach, and a delightfully unexpected picture of four foreign exchange students riding horses. Giddy up. 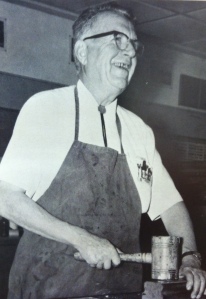 For those interested in San Dieguito history, the dedication to the Hoofprint is a treasure trove of Mustang lore. Smiling out from the pages, a mallet in his hand, is Mr. David Davidson, former San Dieguito superintendent and current (in 1969) San Dieguito printmaking teacher. Many who leave the classroom for administration stay out, especially after rising to the rank of top official in a district, but as the prose beside this photograph explains, after serving as superintendent for nine years, Mr. Davidson went back to the classroom in 1961 where he supervised the literary magazine and the yearbook. He looks happy as a teacher.

Happy too are the students caught just before a wagon race at the Powder Puff Football game. Anticipation, youthful exuberance, and an unfettered joy seen more in teens than adults shines out from this snapshot. This is youth in 1969, free, hopeful, and prone to fun.

On the other side of the coin of youth is studying, and one great photograph from an English class shows Mr. Jordan teaching literature, his pose and deportment begging for a caption. What were they talking about that day? Had they read Hamlet or Hardy? Is the paper he is holding up an essay worth quoting or a quiz that didn’t meet his standards. In the frozen black and white of time, this is simply a scene captured for posterity from half a century ago.

And then there are the donkeys. 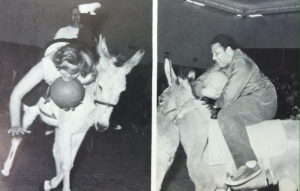 The Hoofprint records that seniors beat the faculty 30-26 in a hard fought contest that saw students and teachers clutching a basketball while trained donkeys in rubber horseshoes trotted up and down the court. A few action shots capture the abject fear of the players, and even a tumble or two, and a group photo at the end of the game shows exhaustion and relief on the faces of the victorious seniors. 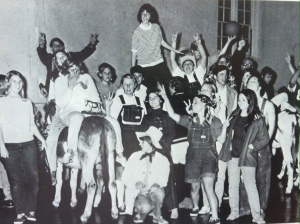 Those same seniors, and students from all four grades, appear in more than 200 pages of photographs, some celebrating the robust music program, others showing clubs from the Future Farmers to the Motorcycle Club. The Hoofprint shows Mr. Liggett preparing students for a production of Molière’s The Miser and Coach Wiley preparing the wrestling team, affectionately called “The Mustang Matmen,” for competition.

The world that these thespians, musicians, athletes, and agriculturalists stepped into after graduation was one of flux and friction, but looking at the faces of the Mustangs in the 1969 yearbook, one can imagine that their years at San Dieguito prepared them to face their future with purpose, passion, and a smile.