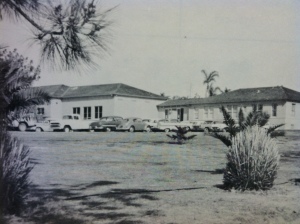 I met them at Tony’s Jacal, a local eatery that has been home to San Dieguito students since the 1940s. Over a burrito and iced tea I listened to stories of an Encinitas before I-5 bisected town, a world of roller rinks, railroad tracks, and a party line on the campus payphone.

These kids from the graduating class of 1964 are a close bunch, crowding reunions and maintaining connections throughout the intervening years. I’d heard they were tight, part of my reason for wanting to talk with a group, not just an individual for my San Dieguito in the 1960s interview, and I was curious to hear how their stories intertwined.

I wasn’t sure what I was walking into when I pulled up to Tony’s, but the lunch that began with polite smiles quickly shifted into smiling conversation and ended with laughter. Len, Thelma, Peter, and Darryl treated me with love, and stories poured out about San Dieguito and of the area as it was when Kennedy was president.

Students at San Dieguito High School in the 1960s share some landmarks with our current students, including the bell tower, Moonlight Beach and the La Paloma Theater, but other staples of the class of ‘64, like Al’s Coffee Shop and the Poinsettia Bowl are memories, real now only in photographs and twinkling eyed conversations.

There was a twinkle in Thelma’s eye as she described life at San Dieguito when she was in high school. With Peter, her husband and Mustang sweetheart, at her side, she described his athletic prowess, and her own participation in GAA, the Girl’s Athletic Association, a group of about twenty female students who played softball, field hockey, and basketball against local schools. These girls worked without the benefit of an athletic director or CIF schedule to arrange their games, instead setting up matches with sister schools, each with a phone call and challenge.

of the biggest events of the year, athletic or otherwise, was homecoming, which in the middle part of the last century was celebrated with a twenty-five foot tall bonfire, fueled with a month’s worth of wood and a splash of gasoline. Students would call up local businesses to borrow flatbed trucks they could use as floats, and the result was a parade through town that saw students shouting “Go Mustangs!” to the sky.

The kids from ‘64 talked about Mr. Cunningham’s wood shop, Coach Wiley’s steely gaze, and the Future Farmers of America located on the southeast corner of campus. “You could smell it just driving by,” Len said, smiling. “They had goats, pigs, and sheep.”

In addition to campus livestock, town was a lot more rural in the 1960s, and Thelma remembered local tomato farmers leaving crates of tomatoes out on Halloween night, “so the kids wouldn’t need to steal them to use in tomato fights on MacKinnon.”

“The involvement between the school and the local businesses was amazing,” Len remembered. And it went both ways, with meaningful charity work by San Dieguito’s Tri-Hi Club and other student groups.

But life wasn’t just tomato fights and parades. The kids from 1964 talked about cleaning erasers, walking the railroad tracks down to Solana Beach, and Darryl told the story of rolling a VW Beetle on a joyride on the yet unopened I-5. 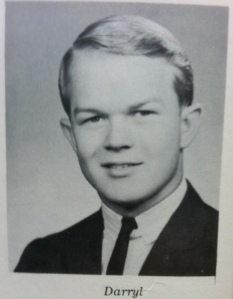 And when they left San Diegutio as students, the class of 1964 didn’t leave each other. Regular lunches, like the one they were kind enough to let me crash, helped to keep the ties that bind. Reunions renewed friendships, and at one, even more; at their 25th reunion Daryl and Francie, two Mustang classmates reconnected, fell in love, and got married. Very San Dieguito.

Much has changed since 1964, but the spirit of these amazing Mustangs has remained constant, as has their love for their school. And while San Dieguito may not see another bonfire or joyride on an empty highway, it’s reassuring to know that friendly and familiar Mustang faces will always gather around a table at Tony’s Jacal.