The small group of students walked into the hangar that had been converted into a schoolhouse in the middle of the Arizona desert. They were hundreds of miles from their home in Encinitas, forcibly “relocated” with their families simply because their heritage was Japanese. Hundreds of miles behind them they’d left the new buildings of San Dieguito Union High School, not even a decade old, teachers who cared for them, and an school cooled by breezes fresh off the Pacific. Poston, Arizona enjoyed no such breezes.

They arrived for the first day of classes uncertain of so many things, and to their surprise one of the first faces they encountered knew them by name. They knew him too, Mr. Main. 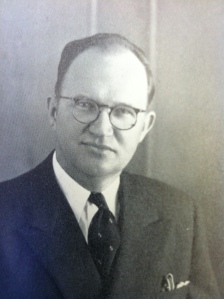 San Dieguito’s isn’t a simple story of black and white, but a rich kaleidoscope of vibrant colors, the colors of reality. It’s messy, like life, and infinitely more interesting than it appears on first blush. San Dieguito’s story also extends beyond the stuccoed breezeways, sometimes into the Arizona desert.

In an earlier post I mentioned that Arthur Main, San Dieguito’s first principal, spent four years in his post before leaving after some controversy around his manner with the staff. He was seen as stern, at least with the adults on campus, and that manner led some to push back against him as the school’s leader. He exited, not completely of his own choosing, with the simple distinction of being San Dieguito’s first principal. It would have been easy to call that the end of his San Dieguito story, but it wouldn’t quite be true.

Mr. Main left San Dieguito in the spring of 1940 and by 1943 had taken a principalship at the Poston Internment Camp in Arizona. It was not an easy task to lead a school without adequate resources or facilities, in a fenced community of displaced families. Students came to him and his school with more stress than many of us can imagine, the reality of being prisoners of war in their own country added to the usual challenges of simply being teenagers.

Those young faces that arrived at Poston’s school had few comforts beyond the immediate strength of their families, but I like to think that the teenagers who were forced from San Dieguito in 1943 found some little relief in seeing their principal was their principal. In that moment of recognition, that instant of familiarity, I want to believe that for a few of the students a small measure familiarity split the pressure of their lives.

Looking back at the records of the camp, it’s easy to see how some of the students’ frustration boiled over in behavior that forced Mr. Main to respond.

In his first year at Poston, Main described an incident when a student he’d suspended from athletics “cussed daylight out of me” and “rushed the principal as if he was going to strike him.” Later “that evening,” Main wrote, “as I work till late in the evenings in my office, the boy came to me in my office and apologized to me. He said he was too excited and lost his head and was sorry. I accepted his apology and shook hands. I also reinstated him to the team.” I don’t know if that student ever attended San Dieguito, but I see in Arthur Main’s response to him a touch of the Mustang spirit I know. “Now the boy is all right; he is behaving well,” Main reported later. “He says ‘Hello’ to me whenever he sees me.” 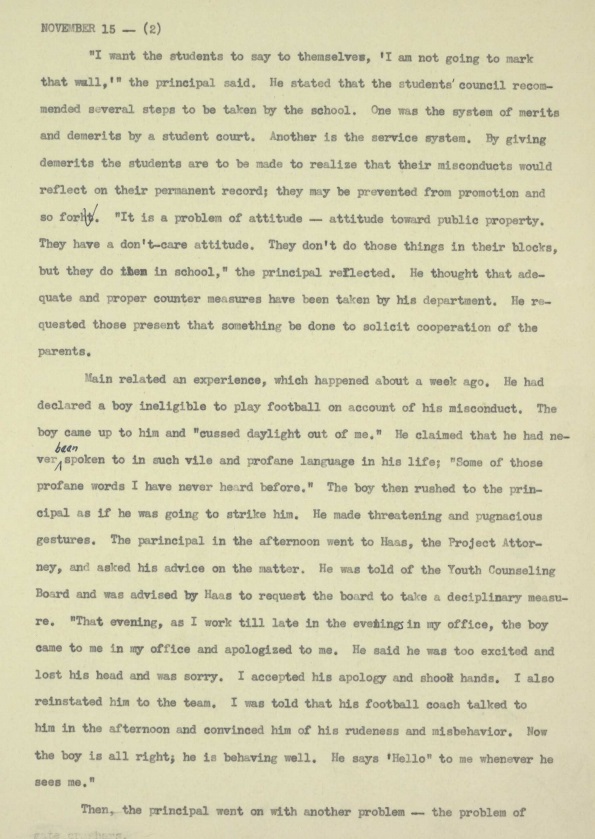 Mr. Main struggled at times in Poston, as did so many who found themselves in this parched corner of American history. Reading of his experiences, so familiar to a principal like me (graffiti in the bathroom, students in conflict with other students, stressed parents worried about their kids) fills me with empathy and reminds me of the profound lessons in kindness I am learning in my time at San Dieguito.

There’s a line in that old song “Can’t Help But Wonder Where I’m Bound” about the people we meet in our lives: “Some are bad, and some are good, and some have done the best they could.” 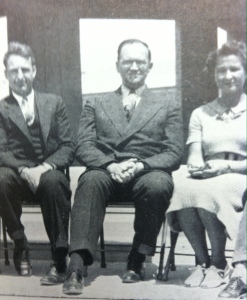 I never met Arthur Main, a man who was younger than I am when he was in the principal’s office at San Dieguito, the same office I sit in today. By all accounts, I see in him the third part of that song lyric; faced with challenges, he did the best he could.

What more could be asked of any of us?

And whether we call it fate or providence, or even just coincidence, I believe that in his position as principal in the middle of an internment camp in the middle of that Arizona desert, at least for a moment he brought ease to the troubled minds of San Dieguito students so far from home.

On Friday our San Dieguito Alumni Association will celebrate San Dieguito’s long history with the next installment of bricks around our bell tower. Among the bricks, sponsored by one of his students, will be a brick for Mr. Arthur Main.