Unlike the black and white photos that fill yearbooks and scrapbooks, the world that students at San Dieguito inhabited in the 1930s and 40s was vibrant, colorful, and always in motion. Talking with early graduates, it’s easy to be transported by their technicolor memories and understand that life then was not so unlike life now: teenagers moved at full throttle, adults worried about whether the kids would turn out to be solid citizens, and the world of school meant high spirits and good friends.

What a treat then, when San Dieguito’s intrepid alumni coordinator, Bonnie Wren, shared some amazing video from the 1941-1942 school year.

Bonnie explained that “the original reel of this 16 mm film landed in the Foundation Office one day, with no note or explanation of its origin. The old library had just been torn down, so we thought perhaps it had been found in the rafters there, or something! I took the film to a digital preservation company but they told me it was too degraded to save. I was lamenting this fact to Bettie Grice Wolfe (’41) who told me she thought she might have a copy, and she did! It was on a VHS tape, copied over a game show, I think, but I was able to transfer it to my hard drive.”

The result is a thing of beauty.

Students watching the movies today would see much that is familiar in the flickering images of their peers from 1941. In one shot a student sits on a bench in the front of the school, the breezeway near the principal’s office stretching out behind her. In another, a group of students clown around in the quad outside the B building, and the expression on the girl’s face as one fellow in a sailor suit sneaks in for a kiss is the same as I’ve seen on kids faces today.

Football was big in 1941, as the grainy film shows, with students lining the field to cheer on their Mustangs beneath the California sun on a field without lights. To see the rows of now vintage cars, which were then simply …cars, is a delight. Watching the players run and score, smiles beneath their leather helmets, reminds us that while sports change, the exhilaration of competition and the joy of rooting for the hometown Mustangs is timeless.

Images from a ceremony in the old gym show different fashion styles (we see far too few letterman’s sweaters today), but the pride in a job well done beams from teenagers and the smiles of adults alike no matter what the decade.

Similar too is the concentration on the faces of the student musicians, the laughter of the students hanging out on campus, and the pride of marching in the Encinitas parade. Of course teachers and administrators dress a bit less formally today. 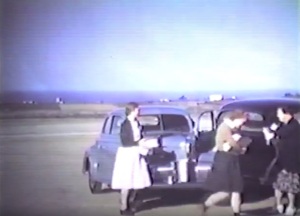 Perhaps the most striking difference between San Dieguito of 1941 and 2016, at least as it’s seen in the movies, is not on campus at all. In many shots, of the games, of teachers arriving at the start of the school day, and of busses of students returning from a trip to the beach, the ocean views across acres of open fields stands in stark juxtaposition to the building boom of the past seventy years.

But a school is defined by its spirit and traditions more than its geography, and this seventy year old video shows that both school spirit and strong traditions were as alive then as they are today. “San Dieguito High: Those Early Years” brings to life a time in our school’s story that should be remembered. The images leap off the screen and provide our contemporary audience with a window into history, our history, the history of San Dieguito.

You can see the video’s at our San Dieguito Alumni Facebook page by clicking on the image below.