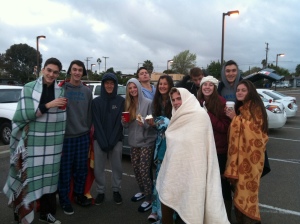 This morning at 6:45 San Dieguito seniors wrapped in blankets and sporting pyjamas gathered together at our “Senior Sunrise” to share bagels, coffee, orange juice, and community. Laughing and leaning into each other, they watched the sun come up over campus and enjoyed each other’s company. These are the memories that will stick with them for decades.

It’s something I’ve noticed about San Dieguito; graduates I talk with feel a connection to the school and each other in a profound way.

I saw it at our “Founders’ Reception” early in the year, when alumni from as far back as the class of 1940 gathered to remember their time at San Dieguito and celebrate their connection to the school. The stories they told painted a picture of a vibrant campus, once home to livestock, Latin class, and the laid back lifestyle of a Southern California beach town.

We still have that surfer spirit, though robotics has replaced animal husbandry, and students are more likely to learn coding than Latin. 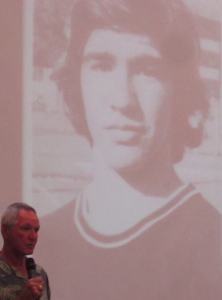 I saw that San Dieguito spirit when former Mustang (and former Miami Dolphin) Mike Kozlowski came to campus to present his alma mater with a golden football, a celebration of the 50th anniversary of the Super Bowl. He’d been dubious at first about making the presentation; San Dieguito no longer has a football team, but after coming back to campus and talking with folks here he felt that magic of reconnection. San Dieguito is his school. When he met with current students, telling stories of his time on campus (about everything from streakers to cinnamon rolls) the flame of memory burned bright.

Looking back four decades, his memories were as real as if they’d happened this morning at 6:45.

Ours is a school rich with history and abundant in stories. Just yesterday a current science teacher told me a story that was as heartwarming as it was typical of San Dieguito. I’m giving a presentation at the school board meeting tonight, and I asked my teachers what I ought to be sure to mention. He sent me this:

“Last Friday, during my second period chem class, a man about 65 or so walked in with a visitors badge and introduced himself as a former student of SDHS. He had stopped in the office to ask Lois for any information about how to contact Shirley Richardson, a former chemistry teacher in the district.

“Shirley began teaching at SDHS in the early 60’s and worked for several years until transferring over to TPHS. She retired from Torrey in 92. Since that time she has come in for several days a week, volunteering as a lab assistant in chemistry. Some years 3 days a week for 9 hours and some years only one, but always regularly, like clockwork, Shirley shows up to help out.

“Back to the action:

“This gentleman, upon asking Lois if she had contact info, was surprised to learn from Lois that, not only did she have contact info for Shirley, but that Shirley was actually at SDA helping out in the chem lab stock room. She was setting up the titration experiment that I am doing tomorrow with my students.

“After coming in and asking for Mrs. Richardson, I directed him to the back and my class listened in. Before closing the door we all overheard him say, “Mrs. Richardson? You probably don’t remember me, but I was your lab assistant in 1969. I just retired from a chemical company and wanted to get in touch with you to let you know that you were the reason I went on to study science and pursue a career in chemistry….”

“They met for several minutes, exchanging stories and catching up. Afterwards he left with an enormous and satisfied grin on his face.”

…and that is San Dieguito. 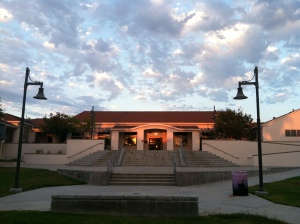 Watching the kids share breakfast this morning I got a feeling of exuberance and nostalgia. This is San Dieguito, a place where students can be themselves and be part of something exceedingly special.