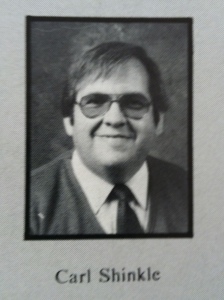 For me it was Mr. Shinkle.

That special teacher, I mean, who made a difference in my life. I liked him when I was sixteen and seventeen, and appreciated him years later, when looking back over twenty years of being a teacher and administrator myself I realized just how much he’d meant to helping me be me.

Mr. Shinkle was my English teacher as a junior at North Salem High School (“Go Vikings!”) and I took AP Literature my senior year so I could have him again. He was neither the stereotypical cool teacher, nor youthful or classically dynamic. Truth be told, he was a doughy bachelor who had as one of his goals visiting every major league baseball ballpark. Likely to be wearing a sweater vest and prone to chuckling at his own jokes, Mr. Shinkle’s appeal came, I think, from his humor and his kindness.

He was a storyteller. Not the kind who let tales of his glory days get in the way of teaching Madame Bovary or Turgenev, but one with the ability to spin a yarn at the opening or end of class about battling a rat in his basement with a mop. I enjoyed it then, and appreciate it now, that he could have thirty teenagers’ rapt attention as he discussed the fray, descriptions of his jousting and bucket work punctuated with a tenor chuckle and self deprecating wit. He had us ready to join him in battle, an offer he dismissed with a customary smile. Perhaps he’d get a cat.

That smile and sense of humor helped to define Mr. Shinkle, something I came to understand, enjoy, and (as a stereotypically narcissistic teenager) eventually exploit.

Count on, might be a better description. I certainly didn’t think about anything but a laugh when I saw an opportunity in Mr. Shinkle’s broken leg during my senior year, and his crutches forcing him into the school elevator.

Without malice, and imagining that he might get a kick out of what I thought was funny, I convinced an assistant principal to let me get into the school elevator early one morning before Mr. Shinkle arrived, a roll of butcher paper under my arm.

I cartooned for the school newspaper, but my good stuff was more likely to be found on pee-chees and in the margins of notes. Caricatures were a staple of my artistic output, and with his glasses, lank hair, and mischievous grin, Mr. Shinkle was a comic strip waiting to happen.

We never talked about my elevator joke, though the day after he said “thanks” to me at the start of class. I’ve been left to imagine what his expression was when Mr. Shinkle hobbled into that elevator and confronted a life sized, sweater vested, cartoon likeness of himself taped to the wall of the elevator.

Beyond storytelling and humor, Mr. Shinkle taught me lessons about patience and acceptance and how to live life. The memory that sticks with me most from his class is from the first day of discussion of The Scarlet Letter my junior year.

Hawthorne’s story of Puritan New England is a classic, taught in high schools from Oregon to Maine. I taught it myself when I became an English teacher, delving into the symbolism and ambiguity, even as I knew that every sixteen year old boy in my classes had the same opinion of Hawthorne’s masterpiece that I’d had in 1986: The Scarlet Letter stinks.

I’d read Huck Finn with Mr. Shinkle, and loved One Flew Over the Cuckoo’s Nest when he taught it, but with The Scarlet Letter I simply couldn’t get past the opening paragraphs. When we got to class the first day after he’d assigned reading, Mr. Shinkle greeted us with a pop quiz.

It was a mini-essay, one paragraph answering the question: “Who was Roger Chillingworth?” I looked at my blank paper.

This was not fill in the blank, or the kind of multiple choice quiz I could guess an answer for. Faced with an unfamiliar name from a book I hadn’t read in a class with a teacher I liked…

Five sentences later I’d described a fictional baseball player worthy of Cooperstown. I turned it in, went home, and made myself read The Scarlet Letter.

Mr. Shinkle might have given me a zero on the quiz, or made fun of me the next day in class (it was a time and a place in public education when such things happened). He might have spoken to me about my attitude, which could easily have been construed as cheeky.

The next day he even read my answer aloud to the class, not to disparage me, but with that smile of his telling me that humor and whimsy had a place in English 11. A place next to Nathaniel Hawthorne.

From that day on I read everything he assigned, and realized that teachers could be pretty great people.

It was a beautiful email from a former student of my own that got me thinking about Mr. Shinkle this winter, her words of kindness prompting in me a pang of guilt for never telling my own favorite high school teacher how much he meant to me.

I did some sleuthing online and found him, that familiar grin greeting me from across the years, and before I return from Winter Break I’ll put pen to paper and let him know the difference he made. If I’m courageous I may even ask him if he remembers his elevator doppelgänger (a word he taught me) or the finest left handed pitcher ever to play for Cleveland.

One thing for sure, I’ll never forget him, and who he allowed me to be.

The best teachers teach with a big heart, sharing a part of themselves with their students. One needn’t be hip or extroverted to be a good teacher, just honest, kind, and passionate about teaching kids. Mr. Shinkle was all of those things. And as I work in schools I’m blessed to walk into classrooms and see great teachers who are the Mr. Shinkles to the kids at the school where I work. It’s magic.

I need to go write a thank you letter.