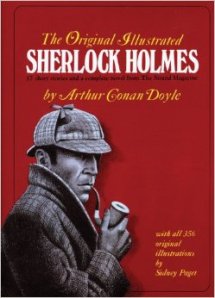 Arthur Conan Doyle changed the world in 1887 when he introduced Sherlock Holmes in the pages of The Strand Magazine. I got to know the great detective about a hundred years later, devouring stories from the thick illustrated book I still keep near my nightstand.

Before I became a principal, I taught more than a little Holmes in my thirteen years in an English classroom, inviting students to enter the foggy world of Victorian London alongside Watson, Lestrade, and the Baker Street Irregulars. Over time I found the stories that worked and the ones that didn’t, so when a stint of subbing inspired me to take a turn in front of a class, I knew the first lesson I wanted to teach would be about Sherlock Holmes.

I chose “The Musgrave Ritual,” a relatively short adventure with most of the hallmarks of a great Holmes story, as well as an opportunity to cut across disciplines and teach a touch of history and some math and measurement that struck me as very common core.

I didn’t want to shy away from the term Common Core State Standards (CCSS), in fact I wanted to understand what they looked like in the classroom from the teaching and learning point of view. As a site administrator I have one point of view, but I knew I’d have better perspective after building an English lesson that involved close reading of the text, integrated some primary source nonfiction, promoted creativity, collaboration, and critical thinking, …and was fun.

Not that any of those CCSS notions are new; I’d done them all in my best lessons, and even for this Musgrave adventure I knew I’d crib a thing or two from my experience as a teacher.

I started planning with the notion that the kids might not have any familiarity with Sherlock Holmes. Maybe they’d watched a movie or seen Sherlock on TV, but I didn’t want their picture of Arthur Conan Doyle’s detective to come in the form of Iron Man or a rebooted Khan.

I put together some images from the original illustrator, Sidney Paget, and found a photo of a handwritten letter from Doyle that expressed his confidence in the artist. Happy with this primary text, I worked up some questions I thought would get the kids thinking.

Next, I wanted a hands on experience, and I reworked an experiment I’d used with my students on observation and deduction. I asked friends for objects or articles of clothing that I could give to groups of students with the challenge that they were to make close observations, think critically about what they noticed, and deduce information about the person that object belonged to. They’d do best if they worked collaboratively and communicated their opinions clearly, and would have a chance to do a bit of writing at the end. This could fly or flop, but I thought it would get them thinking in a way they might not have before.

Holmes and his methods introduced, I prepared to teach the story itself. I knew that I’d use that line from Holmes as a starting point for talking about close reading, which has some similarities to detective work. In “The Reigate Squire” Holmes tells Watson: “It is of the highest importance in the art of detection to be able to recognize, out of a number of facts, which are incidental and which vital. Otherwise your energy and attention must be dissipated instead of being concentrated.” Sounds like critical reading skills.

Thirteen years of teaching English taught me that detective fiction was a great vehicle for teaching close reading, and that Holmes on observation and deduction was good advice when a book was open in front of a student.

Beyond close reading, I knew I wanted to take the lesson beyond Doyle’s words. It’s why I’d chosen this story rather than one with the snakes or hounds or creeping men I knew middle schoolers would love.

I’d used “The Musgrave Ritual” before, in my first year of teaching, when a marvelous math teacher, a big Hawaiian who seldom wore shoes and routinely used triple negatives, joined me to present a short lesson on similar triangles. In the story, Holmes uses triangles to measure the shadow of a tree that had been cut down, leading to the discovery of a missing butler.

I knew I wouldn’t have a big Hawaiian for my lesson, so (inspired by my current math department) I came up with a few prompts I thought might work to get the students thinking about how they might solve Holmes’ puzzle. I found a video online that seemed like it could provide a hint if they got stuck, and to cement this part of the lesson I borrowed long tape measures from my science department so the kids could go outside and measure the height of a big tree in our own quad. I felt ready to go.

After putting a skeleton of the lesson together, I sent it to four teachers on special assignment (ToSAs), who work with teachers in my district to support the implementation of common core. Collaboration can elevate instruction, and I knew these intelligent folks could give me honest feedback that could make my lesson better.

It’s Saturday night as I type this post. I step in front of my first class of 8th graders on Tuesday morning. I’m excited about engaging with the kids in the adventure of learning. I’m looking forward to seeing what works and what doesn’t; it’s teaching, so I know there will be both.

I know I’ll be tired (and inspired) when it’s over, though you won’t hear me complain about being exhausted at the end of the lesson; teachers do this every day.

I can hardly wait for that school bell to ring on Tuesday, when I’ll take a deep breath, look out at that sea of middle school faces, and whisper to myself: “The game is afoot.”

One thought on “The Game is Afoot”